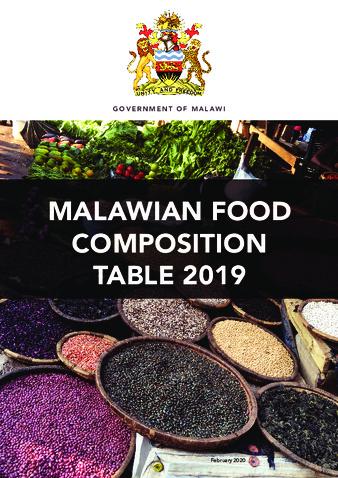 Malawi is one African country that has significantly improved the nutritional status and health of its citizens. For example, stunting decreased by 10% between 2010 and 2016, and vitamin A deficiency dropped from 22% in 2009 to 3.6% in 2016. But the country’s remaining challenges require relevant data about the local diet and its nutrient composition.

Less than half of African countries have an up-to-date food composition table (FCT), which identifies the nutritional content of locally produced and imported foods. This information can help address dietary-related conditions such as food insecurity, undernutrition, overweight/obesity, and related non-communicable disease aftereffects.

To continue its progress in improving nutrition indicators, the Government of Malawi set out to develop an FCT (MAFOODS). The Feed the Future Innovation Lab of Nutrition, based at Tufts University, the South African Medical Research Council (SAMRC), and the Lilongwe University of Agriculture and Natural Resources (LUANAR) came together to support this effort, along with financial assistance from the United States Agency for International Development (USAID).

A dissemination event was held in February 2020 after the Malawi FCT was completed, and was attended by government ministry representatives, academics, food industry professionals, development partners, and the Ministry of Health Principal Secretary Dr. Dan Namarika. The database includes information about the dietary value of 316 commonly consumed foods and 42 nutrient components of home-grown and imported foods. The database is currently available on the Nutrition Innovation Lab website, and will soon be published on the AFRO-FOODS and LUANAR webpages.

The Malawi FCT is highlighted in a recent Nutrition Innovation Lab webinar, “The Malawi Food Composition Database (MAFOODS)," in which speakers involved in developing the FCT discuss the progression of the table’s four phases and their experiences applying the FCT in policy analysis and research.

One of the key research themes of the Nutrition Innovation Lab is to support programs and policy process interventions aimed at improving nutrition. The FCT has become essential in nutrition and dietetic practice, as well as in food labeling, to ensure improved nutritional well-being of the general population.

Plans are underway to expand the FCT food items to 600-800 local and imported foods within the next three years. In the meantime, nutritionists and interested parties can design healthy diets from native foods based on the FCT. Researchers can also expand their analysis of other local foods not yet included in this version, thereby contributing to improved nutritional status and health of the citizens of Malawi, who would effectively contribute to the economic growth and development of the country.

Support for the work in Malawi was provided by the Feed the Future Innovation Lab for Nutrition, which is funded by the United States Agency for International Development (USAID).