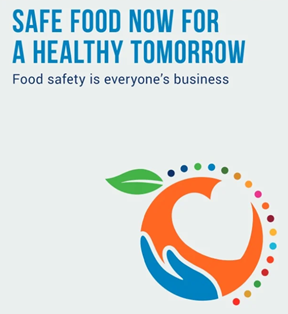 As part of its commitment to generating new evidence relevant to both nutrition and agriculture, the Feed the Future Innovation Lab for Nutrition has been investigating food safety issues, including the impact of food-borne mycotoxins on human nutrition and child growth.

This year’s World Food Safety Month theme “safe food now for a healthy tomorrow” resonated with the Nutrition Lab’s research on the effects of a range of naturally occurring toxins which can contaminate crops and other foodstuffs. We know these can cause serious health problems, and even death, but do this also lead to adverse child growth and development?

There are many types of mycotoxins, including aflatoxins, fumonisins, and ochratoxins.  In the past year, the Nutrition Lab has published findings on aflatoxin exposure in pregnant women of mixed HIV status in Gulu, Uganda, as well as the relationship between aflatoxin and long-bone growth in children in Nepal. Results from both studies suggest that aflatoxin exposure can contribute to negative growth outcomes, even controlling for other dimensions of poverty, location and education. This adds to the body of evidence arguing for ensuring  safe foods even where contamination levels are relatively low.

The Nutrition Innovation Lab also held two dissemination webinars in 2021 on the policy and programmatic implications of its mycotoxin research: “Mycotoxins, Environmental Enteric Dysfunction, and Inflammation: Implications for Research and Programming on Child Growth and Nutrition” and, “The Relationship Between Aflatoxin Exposure and Chronic Malnutrition in Nampula Province, Mozambique.” Panelists in these webinars discussed the importance of long-term efforts to reduce mycotoxin contamination in the food system, including improved seed use, improved crop drying practices and storage, and increased awareness by both smallholder famers and government entities of the impact of mycotoxins on food safety.

Such issues are especially pertinent in light of accelerating climate change, in which changes in temperature, rainfall and humidity pose an increased risk that  mycotoxin risks will expand geographically and intensify in terms of negative effects. The Nutrition Innovation Lab continues to build on such research. To read more on World Food Safety Month, be sure to visit Agrilinks here!

Support for this work was provided by the Feed the Future Innovation Lab for Nutrition, which is funded by the United States Agency for International Development (USAID).